I have been thinking about writing this post for a year now.
A few people have asked me about my ‘leap’ from:
International Labor Standards Analyst for The Walt Disney Company
-> to backpacker
-> to full time yoga teacher in the Caribbean;
And when people ask, I tend to say ‘I’m going to write a blog about it with more info.’;
So here it is, at last.

Part of the reason why I have been resisting writing this article is because I feared it might make me sound like I think I’ve got it all figured out, which I know I don’t.
Then I reminded myself that basing decisions on imaginary based fears is a poor excuse not to share a bit about how my life changed,  in what I consider to be a positive way. So those who dream about a potential similar life change can have a little insight.

In my early 20s I was admirative of my friends who had travelled far from home with just a backpack.
But it wasn’t for me. I didn’t have the financial stability to do it in my 20s, when most of my friends did, so I created a story about how I didn’t want to do it anyway, since I wouldn’t want to travel alone. How could I!?

For my 28th Bday I managed to save some money and decided to go back to Mexico with a childhood friend, for the 1st time in 16 years!
During this trip, my girlfriend and I realised with no hard feelings that we liked doing different things.
I wanted to surf, she wanted to ride horses, I wanted to do lots of yoga, she had never done yoga before…
The last few days of our 3 week holiday, she decided to stay with her dad in Bacalar, and I decided to venture on my own to Tulum. Tulum is close to where I grew up, so I wasn’t quite in unknown territory, but after 16 years of living in Europe, it certainly felt like it.
So here I was, ‘travelling alone’ for 3 days, just enough to help me realise it wasn’t so scary after all. In fact, I loved it so much that I decided I wanted to do it more.
When I went back to work, I asked my manager if I could take a sabbatical the following September. I wanted to allow myself 1 year to save between $12,000 and £12,000. Having spoken to a few travellers I figured out I needed between $1,000 and a £1,000/month, depending on the way in which I wanted to travel. Saving £1,000/ month seemed impossible, so I sat down and worked on a Plan.

I was earning good money with my office job, but like many Londoners, I spent most of it on dinners, clothes, long week ends away and longer holidays, leaving me with very little savings every month.
So I decided to radically change the way I spent my money.

Step 1: No shopping.
I committed to quit shopping for 6 months. No clothes, accessories or anything that was not ‘indispensable’. I really had to redefine my notion of indispensable. It was actually a lot easier than I thought, as I had so many things already. And I did a couple of clothes swaps with friends to keep my wardrobe interesting.

Step 2: No eating out.
I stopped eating out completely.
I had always been pretty good about cooking lunch, but I took it to the next level and avoided spending money on take away coffees and/or snacks. I had no awareness of how much I spent every month on what I considered to be occasional treats.
I declined dinner invitations, explaining I was saving for my sabbatical. I must admit this was not the easiest, as most of my friends went out for dinner to get together, but I would suggest catching a class or doing a picnic on the week end instead.

Step 3: Budgeting and tracking my spending.
I had never done this before and I admit, I looked down on people who did… It seemed so boring and extreme to me, yet I knew it was the only way to keep track of my money, so I downloaded the spending tracker app, which I would recommend to anyone trying to save.

Step 4: Make more money.
This is obviously easier said than done but not impossible.
I was lucky enough to have completed my Yoga Teacher training in the months prior to my decision, so I had a skill I could share, but very little idea of how to. I contacted gyms, fellow yoga teachers and yoga studios until I was teaching most evenings after work. At times it was tiring, but I had a goal in mind and it gave me energy I didn’t know I had.
You don’t need to be a yoga teacher to get a side job. You can work as a nanny, a waiter/waitress, an English teacher, or anything you can think of really. Time to get creative and believe in yourself!

Step 5: Cut back on my overall spending.
Despite not shopping or eating out, I knew I could still save some more by cutting back on some things. I decided to make my friends Birthday cards and gifts, and got into the habit of checking the clearance isle when shopping for food.

And guess what, by the time it was time to Go, I had hit my target and even saved a little extra, which was a nice to have of course.

The concept of a sabbatical is that you take time off work and return to work at the end.
Having a job I liked, colleagues I Loved, a manager who gave me all the flexibility I needed, a short commute, occasional travelling to Paris, Amsterdam and Brussels and with a promotion in sight, I had every intention of going back to my job at the end of my year of travels.

But then, life happened…

6 months and 8 countries into my travels, I stumbled upon an Archipelago on the Caribbean coast of Panama: Bocas del Toro. 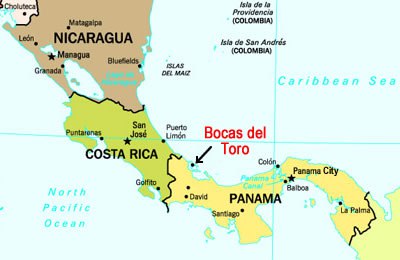 I had never even heard about this place before my travels, but I Loved it from the start. The theme of my travels was ‘Island life’, And having grown up in the Caribbean, I’ve always held a special spot for this Sea in my heart. I only had 3 days on the islands before I headed to Panama City and onto Colombia to meet a friend who was visiting from London. On the 2nd day I met Eduardo, who has now been my boyfriend since then. He convinced me to stay an additional day before continuing my travels. We hung out for 3 days and I decided to buy a rather expensive, out of budget, flight back from Cartagena to Panama City, followed by a 12 hour overnight bus back to Bocas (once my friend left of course!). It made no sense to go back North since my parents were also coming to Colombia less than a month later, but it was what I wanted to do and I had developed a confidence that things would be ok if I ran out of money. Many people I met on my travels did not travel with savings, they volunteered in hostels in exchange of accommodation and found small jobs to do while on the road. This is also an option if saving money is not doable.

During my 2nd visit to the islands I was lucky enough to meet a few women who gave me opportunities to teach. Thank you @Carolina and @Katherine I am immensely grateful. Unsurprisingly, a couple of classes a week were not enough to sustain living on this rather expensive paradise. Fortunately I still had savings to keep me going while I figured things out. So I decided to reach out to hostels, and the gym, to see if I could get more classes. I had to be persistent but it worked. I now teach 7 public yoga classes a week + occasional privates and 1 HIIT class as the gym. Many of my 1st classes were empty, but I saw them as opportunities for self-practice and tried my best to keep a positive attitude.

I also work at my boyfriend’s restaurants one or 2 days a week, and even did a few fun shifts selling tickets for the infamous Filthy Friday.

What I’m trying to say is that it hasn’t been all straightforward from the start. I had to get myself out there. I had to face rejection (in its kindest form), and I still have to face fears regarding financial stability. But I’ve chosen this life of uncertainty and freedom. I get to spend more time doing the things that I love, living at a rhythm that feels more natural to me.

When people ask how long I plan on staying here my answer is always: ‘For as long as I am happy here.’ and luckily my boyfriend is also open to considering life elsewhere when the time is right.

I hope this helps anyone with dreams of changing their life. And remember, Dream Big! Our biggest obstacle is often our mind.

I'm Melissa, I was born in Mexico and grew up with my feet in the sand, my skin always salty from the sea and my curly hair knotted. My parents are French, my mum is half Senegalese and I lived in Marseille for 6 years, I also lived in London for 11 years and I have now been living in Central America for 5 years but the World is my Home. After living most of my life as I thought I should; going to university, completing a Masters degree, working in the corporate World and spending money on things and experiences that brought me temporary fulfilment, I found Yoga. I now realise that I was looking for something, without knowing I was, or what it was. I longed for meaning that no pair of shoes, holiday or promotion could ever give me. I fell in love with the practice. I started meditating daily, went to yoga classes most days and I began to notice how my spiritual practice positively radiated to every area of my life. Yoga led me to the most profound realisation - Everything I ever longed for was within me. Yoga impacted my life and my relationships so profoundly, that I felt inspired to deepen my understanding of yogic philosophy and share it with others. Yoga Teacher Training revolutionised my understanding not only of Yoga but of mySelf and Life itself. I have since continued to learn from wonderful teachers that have guided me and inspired me to further my learning and continue on the path of self-realization. I guide classes, workshops, ceremonies, retreats and Yoga Teacher Trainings and I continue to be amazed by the healing and transforming powers of breath, movement, stillness, intention and connection and am grateful every day for the opportunity to share these practices with others.